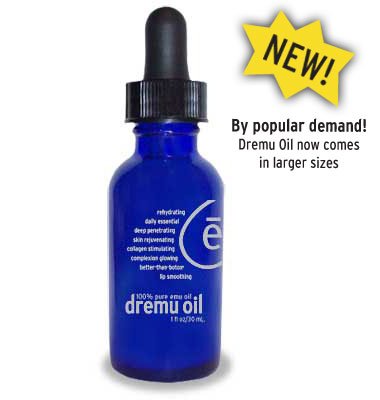 Dremu Oil Serum 2 oz. The Only Triple Refined Emu Oil - Beware of Imitations Factory Sealed Bottle. Dremu Oil is the only Triple Emu Oil in the world. It is refined in USDA and FDA approved labs. Dremu exceeds the American Emu Association "Fully Refined" standards using a third refining process called Molecular Distillation. Tests have shown that "Fully Refined" emu oil may still have as much as 10% impurities, so we insist on that third step. Molecular distillation is an expensive additional process that yields a very clean oil free of impurities, bacteria, toxins and heavy metals. This is extremely important. Whatever you ingest passes through the liver. Your liver functions to detoxify and neutralize harmful ingredients. However emu oil is absorbed through your skin and doesn't pass through the liver so you want the highest purity level. This distillation is what makes our emu oil Triple-Refined - nothing less would be acceptable by Dremu standards. Dremu exceeds the standards of the American Emu Association and the American Oil Chemists Society, producing the highest quality emu oil in the world: Dremu Oil.
Tweet